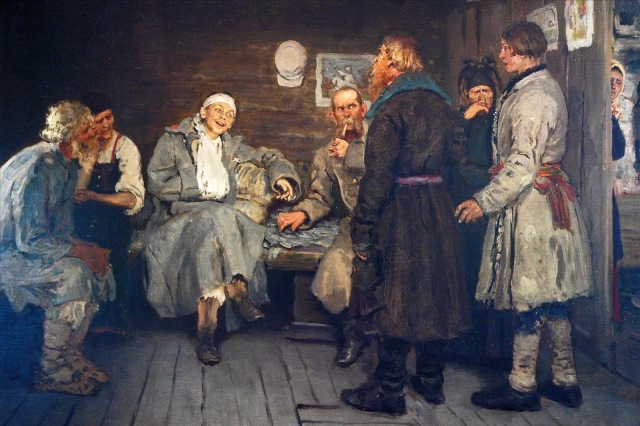 Three Novellas: Punin and Baburin, The Inn, and The Watch, by Ivan Turgenev and translated by Marion Mainwaring.

For a project I’m working on, I’ve been reading the works of Ivan Turgenev.

Wedged as he is in between the two monstrous geniuses of Dostoyevsky and Tolstoy, Turgenev doesn’t receive the nearly same attention as Tolstoyevsky. And that’s a damn shame.

Lyrical, penetrating, subtly crafted, Turgenev’s stories work on every end of the spectrum from humor to suspense to melancholy. He draws you into his world, one of serfs, petty nobles, and birches, sure, but also one filled with passionate characters who often stumble through a hard-won wisdom. That new knowledge is often bitter. Yet, the key shifts from comic to tragic and even to the uncanny with seamless ease.

In this collection, the first novella follows an odd couple from the view point of a boy who keeps meeting them as he passes on. Punin is sort of a holy fool, Baburin a committed radical (for the time). The second novella describes an act of fathomless betrayal that ultimately leads to wisdom, ruin, and a surface prosperity for the traitor. The final story traces how a watch, given initially as a present, unwinds a family.

Turgenev’s stories are less about plots than they are about overgrown gardens, the pale skin and dark eyes of a half-peasant, or, simply, longing as much as a simple narrative. Sometimes comic and always profound, always mysterious and beautiful, Turgenev’s work puts him there in the pantheon along with the gargantuans of his generation.

These were all fine novellas. I’d recommend them to anyone who cares about love, literature, or life. If you’re new to Turgenev, though, I’d start with A Sportsman’s Sketchbook, Fathers and Sons, or my favorite, First Love.