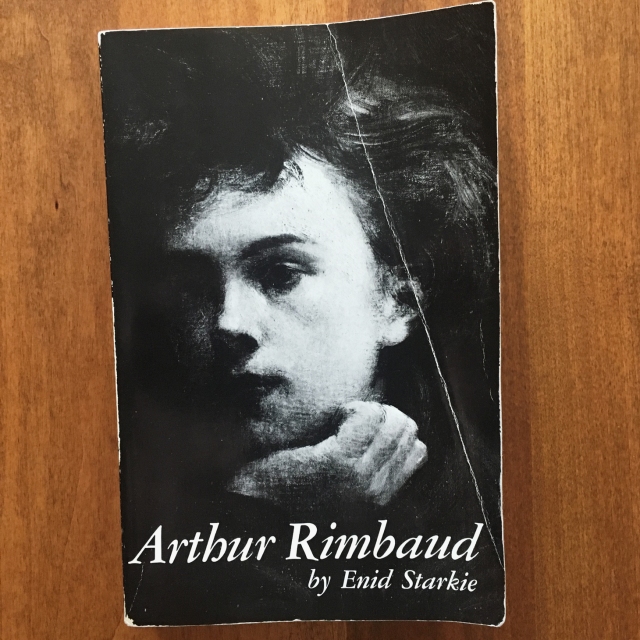 The details seem mythical. A preternaturally gifted boy writes lyrical poetry better than the literary stars of his age. Then he rebels, writes new work that transcends anything ever written and remakes poetry forever. As he touches the face of God and plunges into hells, Rimbaud also struggles with a tempestuous affair with the other leading poet of his time, Verlaine.

All by the time he was 20. Disillusioned with poetry and his failure to transform the world, he gives up literature. He wanders, then turns to trading guns and goods on the shores of the Red Sea. Rimbaud died at 37 a victim of cancer.

(Man, what was up with those 19th century geniuses? Poe, Van Gogh, Baudelaire, Doestoyevsky, Keats, Byron, the list of great monsters and great sufferers is long.)

Professor Starkie tells the story well. She writes clearly with a fine eye for illuminating details. More than a biography, the book includes detailed readings of Rimbaud’s work. The analysis of the poems is grounded, free of ideology and well based in the works themselves.

That said, some of her interpretations seem reductive, even if they’re well argued. Her research into Rimbaud’s alchemical studies provides us with some useful insights. But to say a poem like “Voyelles” is a descriptions of on the transformation sequences of the soul as taught by a magickal theorist drains a lot of the true magic out of the poem.

Three issues: If you don’t speak French, you’ll need a translation of the poems handy. She also quotes significant passages of Rimbaud’s prose in French without an English version. Starkie also seems naive about hashish and homosexuality.

Overall, this is a fine work of scholarship and of intellectual integrity as well as a beautiful tribute to one of greatest poets to have graced the planet.