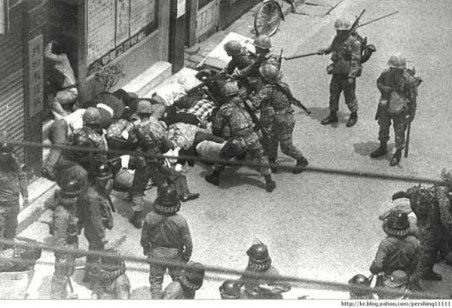 After you died I could not hold a funeral,
And so my life became a funeral.

Today, May 18, marks the fortieth anniversary of the Gwangju Uprising. Human Acts, by  Han Kang, takes this massacre as the subject of her powerful and unforgettable novel.

First, some background: In October, 1979, the assassination of dictator Park Chung-hee raised hopes for democracy in South Korea. Instead, the head of security apparatus, Major General Chun Dohwan, lead a coup. On May 17, 1980, he declared martial law.

In the southern city of Gwangju, students, many of them still in high school, lead peaceful protests.

The new strongman sent in special forces to crush the demonstration.

The paratroopers used boots and rifle butts at first. They switched to bayonets to slash and kill. They used rape to break and humiliate. They finally used automatic weapons.

The students, factory workers, and shopkeepers fell in bloody heaps. The soldiers piled the corpses in anonymous graves. But the resistance continued until May 27 when the army made a final push, massacring the resistants.

Afterwards, the government forces rounded up the surviving demonstrators and held them in prison for months, torturing them.

But one death is one too many.

And that’s the strength and the terrible beauty of Han Kang’s novel, Human Acts. We learn the specific weight of death. She hardly ever shows the violence head on. Instead, we feel the consequences. We see the corpses rather than the cuts or the shots. We live through the grief, not the battles.

Each chapter relates the events of Gwangju through the perspective of a different character and at a different time. The spine, or heart of the book is a 14 year old boy, Dong ho, who is gunned down after helping sort the corpses of the fallen. From him, Han Kang radiates out to include the intellectuals, the idealists, the factory girls and the bereaved who also have their stories to tell. Each is related to the boy in some way, and to each other.

They’re stories of aftermaths. Of how you manage wounds and trauma. It recalls the Greek tragedies, especially Antigone. Fate looms. Violence boils just around the corner. Choices matter. The character acts, and then lives with the consequences of her decision. Implicit on every page is the dignity of the individual, the necessity of mourning, and the evil that runs just below the surface.

The novel reeks of sweat, rot, and smoke — you feel the blood trickling down your back, the stench of the corpses, the fragrance of cold rice and charcoal fires. She avoids the traps of sentimentality or sensationalizing the events themselves. Nor does she fall into easy philosophizing. The characters, in the face of overwhelming brutality may consider the nature of the soul or of humanity:

“Is it true that human beings are fundamentally cruel? Is the experience of cruelty the only thing we share as a species? Is the dignity that we cling to nothing but self-delusion, masking from ourselves the single truth: that each one of us is capable of being reduced to an insect, a ravening beast, a lump of meat? To be degraded, slaughtered – is this the essential of humankind, one which history has confirmed as inevitable?”

But Kang doesn’t allow us to dwell in abstractions, ever. The story moves back to the sting of a slap, or the bile rising after a drinking bout that tries, and fails, to erase the pain of tortures remembered.

The only flaw of the novel is that it assumes that you know about the events in Gwangju. The translator provides a helpful introduction. But the drivers of the dictatorship, the broader social issues and the history that fed into the massacre aren’t in the book. In cinematic terms, it’s a story made of close-ups.

The translation itself reads well, always simple, clear, and evocative.

Human Acts brilliantly evokes the memory and the bravery of the people who fought against oppression — and the consequences of their courage.

I found these resources about Gwangju and the novel very helpful:

The Gwangju Massacre (an overview at ThoughtCo)

An Interview with Han Kang

Slide show  about “Marching for Our Beloved”
(This protest song was banned, and singing it would land you in prison)

And thank you to E., who gave me the book and introduced me to this tragic chapter of Korean history.

Two boys, about nine or so, play in the backyard next to my house. They bounce on a trampoline and make up adventures for themselves.

A couple of weeks ago, they planned attacks on North Korea using jet propulsion packs. (Why North Korea, I don’t know. When I was a kid, we battled Nazis.)

That’s the new word of the day: doomscrolling.

Definition on Urban Dictionary, 24 March 2020: “Obsessively reading social media posts about how utterly fucked we are.”

When I was growing up, Sundays were different. No 24/7 anything, not even television. Stores were closed, so many that it wasn’t worth going shopping.

Church services stretched on for hours, my neck choked by my collar and the clip-on tie.

Afternoons meant an equally endless dinner with my grandmothers. I liked seeing them. But I could never understand, as a kid, why people would want to sit around the roast and talk forever.

That left a few scant hours of daylight. Other kids on my block were generally stuck with their parents, so no games. Maybe I’d read. In elementary school, I did my best to forget the homework I had left undone.

I hated Sundays. The boredom flattened me.

At the same time, Sundays offered a pause. Dads, invisible during the week, were out in jeans or khakis, doing dad things like fixing the Ford. The moms seemed happier. All you’d hear was the clank of metal on concrete when our neighbor dropped a tool in his garage. Or the inevitable drone of a single-engine airplane.

As evening fell, mild anxiety about Monday would gradually rise like floodwater.  Even as an adult, Sunday evenings would pull me down, the way swampy mud pulls on your boots. No question, the worst night of the week, and the one when insomnia might pay a visit.

Mondays were easier. You went to work. As a kid, I might face my teacher’s wrath. As an adult, I powered through whatever had been keeping me up the night before.

Under our lockdown lite®, we’re living those Sundays all over again. Kids ride bikes. Dads tinker in the yards. Old couples trudge hand in hand through the park. The evenings especially are deeply, even eerily quiet. The main difference is that liquor stores are open and churches, closed.

In real life, that is, offline, away from the video clips and headlines, it’s calm. Almost boring, you’d say, but soaked with underlying dread.

Now we’re waiting, at least here, in Colorado. The case loads and the deaths are growing. But it’s neither New York nor Italy, Wuhan nor Spain. Whatever’s coming hasn’t hit yet.

But Monday’s right around the corner.

For now,  I’m focused on the present, on slow walks in the park and quick visits to the grocery store.

And wondering how or what might be the best way to face whatever Monday brings.

When we come to the end of the stay at home order, do you think there will be more divorces or more new borns?

Or a lot more of both?

Probably for the same reasons: health, cabin fever, wondering if you’ll be allowed to leave the house in a few days. Or, for fun. To surface from the media soup and breath a little fresh air.

And as you approach each other on the winding path, you make quick, nervous eye contact. You head right, veering off the asphalt to the grass. So does the other person. Sometimes you get a cheery, apologetic hello. Sometimes a reproachful glance. Some mothers actually start shoeing their kids away from your direction.

The older the person, the wider the distance.

Even though you’re doing the same, it still feels personal. It’s not. You know it isn’t, not exactly.

But it sure is strange to feel like a leper. 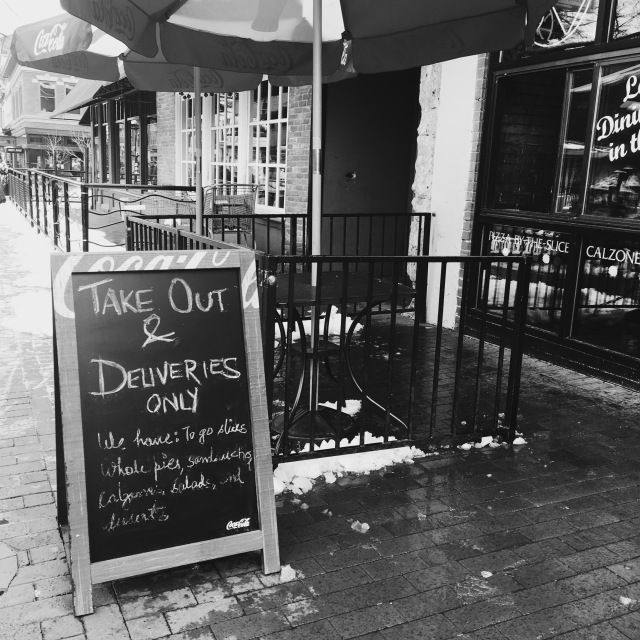 We have 38 confirmed Covid-19 cases today in Boulder. That number makes the measures taken so far seem melodramatic and disproportionate. But, we have the tragic example of Italy to learn from.

Families crowd the parks. Moms, dads, and the kids march along, the parents a bit haggard, the children aimless and disorderly, veering off to bang sticks or chase geese. As you approach, the adults will belt out a hearty hello, but shy away to maintain the proper  distance.

Older couples stride with purpose. They’ve read the same articles I have about boosting the immune system with sunshine and fresh air, and they seem determined to charge every single cell with as much health as possible.

By contrast, the Pearl Street Mall is dead. On a weekend afternoon, it’s usually crowded with tourists, families, buskers, balloon blowers, green-haired millennials, and hipsters of every stripe. Now only a few people stroll along the bricks.

Without people in front of them, the buildings look unfamiliar. Without the weekend crowds, the homeless seem to have taken over the mall. It’s about one-to-one, homeless to housed.

Only a few businesses are open. A Mexican restaurant offers takeouts at the windows. So does a pizza place. A candy shop and a poster store still welcome customers. Every other store is shut with variations of the same notice taped to the door.

All around, it’s oddly quiet. Traffic noise has dwindled to nearly nothing. As a friend said, it’s like the quiet of a snow day when everyone just stays home.

Just Before Dark
Blog at WordPress.com.